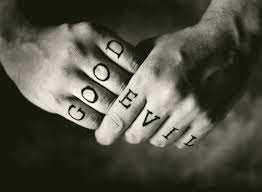 Whether we are young or old, married or single, have a good family or not, rich or poor, we have this condition in common: each of us are utterly imperfect and the world makes sure that we know it. Often I feel as though I am a wave tossed back and forth by the current of the great ocean unable to provide direction for myself. Just when I think I have control, life once again bombards me with trouble and anguish and uncertainty. I constantly question my own decisions and with each new critic I wonder if I am doing this thing called life right at all.

Why is life so difficult? Why must we strain so hard to do what is right? Why does the world demand so much of us? I am here to tell you that there is hope!

There was a time in my life that I did not feel guilt. I know what was taught to me as being wrong, but I also knew that certain moral action seemed to be cultural. For instance, I was taught as a child that alcohol was evil and now that I am older, I see the trend changing even among God’s people. What was taught me by my parents and other adults did not seem necessarily true. What was wrong was wrong because of a certain punishment I might receive. Guilt, though, was absent. I operated on a system of punishment and reward. In fact, it was not until I came to know Christ that a felt ‘guilt’. Still, I would not refer to it as a feeling of guilt as much as God’s conviction in my life.

In Romans, chapter 7 and verse 13, Paul begins to expound on the idea that the Law, specifically as it was given to Moses, did not bring death to people. The Law was given to reveal sin to us, but did not itself cause sin. The law was given to lead us into God’s grace, but did not cause the trespass that brought about death in us. Even after receiving the ten commandments from God, Moses told the people that God was testing them, so that the fear of God might keep them from sinning.[2] It is almost as if the Ten Commandments, though they were meant to be followed, would not keep Israel from sinning. It is the fear of God only that accomplishes this! Even the Old Testament reveals that without the Law, men are still cursed. Even without guilt, men are guilty and shameful.

What, then should we do? When we recognize our own imperfections and the imperfections of our fellow man, we should not judge for it is not our place to judge. There is only one judge and that judge is God. He alone will bring every action and every thought into account. We are imperfect, and therefore do not have the right to judge! Because of this fact, I can work with people whose primary language consists of four letter words. Because of this, I can love the homosexual with the love of Christ. Because of this, I can call Democrats brothers and I can love the whore as though she were my sister. I can disagree with lifestyles and life-decisions of others. What I cannot do is offer them the judgment of God, for it is God alone who judges the actions and the intent of men. It is God who has chosen to forgive men through the death and resurrection of His Son, Jesus Christ.

No matter how we might choose to dissect it, there is obviously good in the world. This means that there is also evil in the world. Whether by human intuition or by human feeling or by apparent observation, this statement is true. There is both good and evil in the world and, because of their opposing natures, they are at war with one another. To believe that there is good in the world, and that there is evil, insinuates yet another belief. It is the belief that there is some sort of standard for good. A standard that asserts good as good and that opposes what is evil. For many within our culture this standard only exists within self. What is good is good because I somehow see it as good and what is not good must be evil. This view of good and evil, though, breaks down when one human being disagrees about what is good with another. For, if men are subject to a standard of good, that standard cannot be defined under mankind’s feet. The standard for good must be above man’s authority, else neither good nor evil exists for mankind. It is apparent, though, that men are subject to both good and to evil. Here, Paul argues that the Law, which came directly from God, is good.

He also argues that nothing good lives within him. If there is a standard for good, and we do not submit to that standard, then we are sinful by nature. As most people agree, no man is perfect and no man can achieve perfection. We are all sinful by nature and there is therefore no good within us. But good exists. Since no person is good, by this standard, the good wages war against the nature of men. In essence, to admit that we have failed at some point is to admit that good wages war against our nature. To make this admission is to also admit that the evil nature within us can be defeated. The Christian life is not about human emotion, it is about waging war against the evil within us by accepting the good. If God is the standard for good, then the only way to destroy this evil is to submit to God.

God has given us both reason and discernment. He gives wisdom to those who ask and is in the business of forgiving His people. In His letter to the Corinthians, Paul makes this statement, “Therefore, whether you eat or drink, or whatever you do, do everything for Gods glory.”[3] To wage war against the evil inside of us is not to ask whether or not something is permitted. Questions like, “How far can I go without actually having sex?” “Would it be okay to miss church this one time?” “How much alcohol can I actually have?” do not carry any weight within the Christian life. Furthermore, always being concerned with defending our own actions is worthless. The one question we should always ask is whether or not the decision we will make honors or dishonors God. Indeed, we must rely on God to provide the correct answer to that question. “How can I treat my girlfriend in a way that honors God?” “Does denying myself in order to make it to church honor God?” “Will I honor God by having this drink?” To honor God is to do good, and to do good is to wage war against the evil within us.

As human beings, we are completely and utterly depraved. There is hope! God has offered a rescuer for us and His name is Jesus Christ! Jesus took all of my imperfection and my sinfulness, which existed even without the Law, took it upon Himself and killed it on a Roman cross. He was raised from the dead, conquering that sinfulness and that imperfection and defeating evil. Christ is the reason that I can be free from the prison of sin and death. Romans 10:9 states that if we confess with our mouths that Jesus is Lord and believe in our hearts that God raised Him from the dead, we will be saved. We can each be saved from this prison of death, even if we do not see death.

For my brothers and sisters in the faith, remember not to judge. Reach out to the same type of people that Christ sought during His time on this earth. Love the homosexual, the whore and the ungodly for they need the same savior that we have come to know. Wage war against evil by honoring god in your decisions and pray that I do the same.

For those who do not yet know Christ, there is a freedom from the prison that envelops. We know your imperfect and God knows you are imperfect. The only way to kill that disease is to trust in Christ. We invite you to trust in Christ and to declare war on the imperfection that has so infected all of us.

*To read or listen to the Pastor’s sermon, click here.