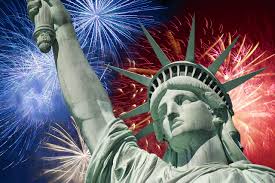 When any holiday comes around, I try to reflect on the reason we celebrate that holiday. On July 2nd, 1776, representatives from the 13 colonies voted to declare their independence and two days later, on July 4th, the Declaration of Independence was signed. It is on this day that the 13 colonies formally cut their dependence on Great Britain.[1] The reasons that the colonists wanted to cut ties with Great Britain can be simplified to two: 1) Taxes were too high because Britain was trying to pay debt it had accrued in the French and Indian War, and 2) Control. The greater of these was control. Great Britain thought it necessary to occupy territory in certain colonies, leading to events like the Boston Massacre. They taxed more heavily, leading to conflicts like the Boston Tea Party. They also tried to remove guns and powder from colonies like Williamsburg,

What do we celebrate?

On Independence Day, then, we celebrate rebellion against an overarching government that has too much control. We celebrate the sentiments of John Locke, whose words were the philosophy of the United States. His interpretation of Genesis 1 insisted that all people were created equal. Because of this equality, no person had the natural right to exercise any control over another person, period. This is why we champion democracy and why I love this country so much. According to Locke, government was only to exist in such a capacity that it absolutely protected personal liberty. These words are corroborated in the Preamble to the Constitution. On Independence Day, we celebrate the fact that this country was founded upon the idea of people being able to live independently of government control and regulation.

The sad reality is that with each new year we champion this sort of equality, democracy, liberty and independence less and less. Taxes are high and used to fund government projects and programs that ensure that those in the government keep control over citizens. Let me give a few examples simply to illustrate what I am saying:

I am personally dissatisfied with our nations leadership and its current level of personal independence and liberty. I rarely speak of my disappointment, especially regarding political matters; but in light of Independence Day, I have to say that what I celebrate is an idea of the past. I think the time has come for our government to step back. Stop imposing new regulations, requiring new licenses, increasing American taxes, registering property and people, etc… A government that is constantly seeking control of its own people is a government that does not believe in the equality of persons. Equality literally means that no one person has any right to exercise control over another. This being said, it amazes me that people who demand equality also demand that the government regulate that equality and in so doing create an unequal society.

The words, “Give me liberty or give me death,” continue to become more relevant for our current culture. If we truly had independence, we would not see business owners being fined for refusing to provide their services to anyone. Homosexual and heterosexual couples alike would not have to deal with registration and licensing. The IRS would not exist, and people would not be required to participate in Affordable Care.

As we move into the election season, my hope is that we elect a president and a congress who believe in true human equality (that no person should control another). I am looking for a candidate who is first of all a Christian (so he/she can believe that God has all authority) and who secondly believes that people ought not have control over other people (this is only possible if there is an authority greater than humankind). I am looking for a president who will remove the shackles of over-regulation and registration, and who will inspire a nation “by the people, FOR THE PEOPLE.” Moving into the next year, I am voting for independence and I hope you will join me.